I never thought about breast cancer.

It was back in 2013. I noticed my left breast was very swollen. I immediately went to my doctor. I was insistent that something was wrong. He referred me to a surgeon specializing in breast cancer. At the appointment, the doctor tried to dismiss me. Halfway through the examination, he stated, "it’s breast tissue men have breast tissue". I pressed him and he reluctantly ordered a mammogram and biopsy. It came back negative.

A year later I found a lump. I was assigned a new doctor and received another mammogram and biopsy. It came back positive. From the very beginning, I was never afraid. I never cried. I never said why me. It doesn’t make me a better person than anyone else it was my way of dealing with it. Positive by nature I pressed on. After telling my boss I was having surgery I instructed him to tell my coworkers I have breast cancer and I would be back. I had a full mastectomy. I was stage zero estrogen-based in situ. No radiation no chemotherapy. I caught it early. I didn’t want ribbons. A “Cancer Sucks” T-shirt would not help me. Why? Because I hadn’t battled it like others. No wrenching treatments. An uneventful surgery and I was done.

A man with breast cancer

Two years later I discovered another lump. Another biopsy and it came back positive. Another surgery and it was gone. This time it was invasive and I was thunderstruck. But I caught it early again. I had 30 radiation treatments and I take Tamoxifen. I realized I was a man with breast cancer. This is a thing. I was deserving of ribbons. I was never afraid or embarrassed by my diagnosis from the beginning. I shouted from the rooftops about it. A friend at work asked how I was doing and then exclaimed, “I heard you lost a Moob!”. I burst out laughing and knew from that point on humor would be my friend. But I was left with a nagging feeling.

The power of advocacy

This all happened both times in and around the month of October. And no one’s talking about men with breast cancer. I think I’ll start a male breast cancer survivor group and it will be, “ Me, Myself and I”. So I talked about it. I discovered The Male Breast Cancer Coalition. They gave me a voice. With the help of my doctor, I got a write-up in Men's Health Online. My wife and I were googling online and more about me showed up. Pictures I posted of me. Articles picked up by news organizations and pushed around the world on the internet. I was interviewed for WGN television Chicago news. I was interviewed for an Irish news TV program. All of these outlets told my story excellently. A podcast. Things I’m proud of. But talking directly to people I meet. Telling others my story. Urging them that men can get breast cancer too.

I am one of the fortunate ones who get to educate and tell everyone because it saves lives. Take away the stigma. Let men know there is not an embarrassment to be had. It’s not a woman’s disease. It’s a person’s disease. We all know cancer does not discriminate. Especially breast cancer. So I will continue to tell my story. It is my mission.

My dream for breast cancer

My dream would be for the pink organizations to embrace us and stand with us. We need the power they have to destigmatize male breast cancer. I am a most fortunate person and I am thankful every day. 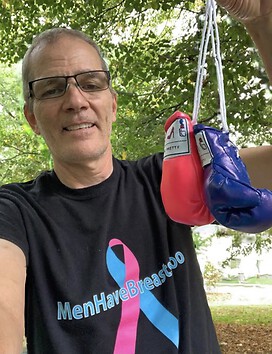 Stage I to Stage IV

The Fallible Caregiver #1: Fighting to Turn Tragedy into Triumph

Have you had a mastectomy done?