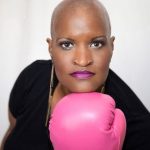 The morning began like every other weekday – exercise, coffee, bagel with cream cheese, and a side of crispy bacon. Same routine every weekday, 52 weeks a year.

I wrapped up breakfast and took my usual hot shower before getting dressed and heading downstairs to my home office to begin my workweek.

As I began to wash my body, I decided that it was time for me to do a self-check. As I began my self-check, I felt a lump the size of a quarter on my right breast. My world stopped, yet it was spinning out of control at that very moment.

Could I be doing this exam all wrong? Did I really just feel a quarter-sized lump in my breast? Was this a fatty tumor, lumpy breast, the big C? A million questions flooded my mind and the tears began to roll faster than a heavy summer’s rain.

I stood in the shower for what seemed like hours. I could feel my fingers wrinkle and tighten from too much water. I turned off the shower, dried my weary body, put on some PJ’s, and crawled back into bed.

Is the lump breast cancer?

I lay there as still as a corpse while a million and one thoughts raced through my mind. If this was the big C, what was I going to do? Should I call my primary care doctor? Should I ignore the lump? Should I call my partner? I had a ton of questions and yet not a single one of them could be answered now when I needed answers the most.

I cried myself to sleep, but I awakened with the same amount of unanswered questions. I decided to do the breast exam over again, and again and again. Same test, same unwanted results.

That’s what friends do

I picked up my phone and slowly dialed my doctor’s number. She answered on the second ring. I asked her if I should come in, and she said that she would come over instead. After all, we had been friends for over twenty years. So, that’s what friends do, they come to each other’s rescue.

The moment she entered my home, I fell into her arms and wept. I already knew that it was the big C, no matter how I tried to convince myself that it was something different. As she examined my breast, she too felt the unwelcome visitor.

She made a few phone calls, and before I knew it I was in a women’s wellness clinic, getting blood drawn, undergoing an ultrasound, a mammogram, and more breast exams. She was even able to get an emergency biopsy done.

I returned home and I waited for concrete, solid answers—good, bad or inconclusive. Hours later she arrived at my door with dinner and wine.

She sat across from me and—with her one hundred percent “doctor“ essence—told me that she was able to pull some strings, and she had received my results. She told me that I had a form of breast cancer called Triple Negative, Stage 2B.

She held my hand and promised me that we would beat it. It felt as if my breath had been taken away a million times. She kept telling me to breathe, I kept forgetting to. She also informed me that she had canceled all of her appointments the next day so that she could spend the first 24 hours with me.

That meant everything to me. That night we talked about everything and nothing. We laughed. We cried. We ate. We drank. We watched movies. And we crashed. We both woke up in the middle of the night and repeated our earlier shenanigans.