There is growing evidence that spending time in nature can help people feel less depressed, anxious or stressed.1,2 Maintaining our connection to nature can improve one’s quality of life and emotional health in many ways.1-4 Enjoying green spaces can help reduce stress in the moment, and it can make it easier to recover from stress in the future.2

Why we need nature

Living in a city has many benefits but it can make it harder to connect to nature.1-4 Living in urban environments, lots of screen time, and more time indoors instead of being outside can make us even more disconnected. This separation from nature can have a negative effect on our emotional well-being.4 Researchers have been trying to understand exactly how we can use nature to help with mood disorders, depression and anxiety.1-4

Most people know that walking can improve physical health. Now we are learning that where you walk matters when it comes to mental health. One study looked at people who took a 90-minute walk in nature compared to one in an urban setting. They discovered that the people who went on the nature walk had fewer repetitive negative thoughts about themselves, also known as rumination, a potential risk factor for mental illness. The subjects who walked in nature also appeared to have less activity in the part of the brain that may be responsible for depression compared to the people who walked through the city.3 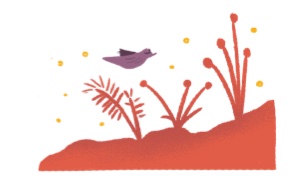 Other ways to enjoy nature

It is not always possible to be out in nature physically, but that does not mean one must miss out on the benefits nature can bring. A study showed that simply looking at pictures of nature can help people relax and reduce stress.2,4 People were given photos of a nature scene to look at before and after a stressful math problem. The ones who looked at pictures of trees and grass recovered faster and showed less stress than people who looked at pictures of buildings and cities.4 For those with visual impairment, even listening to nature sounds can have an effect, including reducing blood pressure.1,2 Listening to the sounds of nature shifts attention outward and puts the brain in a state similar to daydreaming.1

From the smell of pine trees in the forest, to the sound of ocean waves hitting the beach, being close to nature can be a great way to improve your mood. No prescription or special equipment is required and it doesn’t have to take a lot of time. 20-30 minutes a few times a week is enough to make a difference.1

Here are some simple ways to bring more nature to your life:1

Maintaining our connection to nature can improve one’s quality of life and emotional health in many ways.1-4 The goal is to find what you enjoy and make it part of your routine.1

Please read our rules before commenting.

Do you find it easy to advocate for yourself?